Bud and Temple by Jeanie Scott 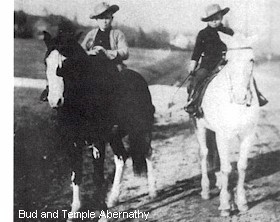 This is the story of two little boys from the small town of Frederick, Oklahoma. In 1910 at age 6 and 10, they went on a remarkable adventure all alone. The Abernathy Brothers, Louis(Bud) and Temple(Temp), rode all alone, on horseback, from Frederick, Oklahoma, in southwest Oklahoma, to New York City, some 2,000 miles away to visit their friend, President Teddy Roosevelt. Teddy was returning from an African Safari. Their dad, 'Catch 'em Alive' Jack Abernathy, who was able to catch wolves with his bare hands, had had many exciting adventures of his own. So when his young sons asked him to let them do this, he felt he couldn't refuse. This was not their first, nor would it be their last amazing travels. All in all they had five adventures, including driving their very own Brush automobile back home from New York City that very same year. You may read more about these boys in a number of books written about them, but probably the best is "BUD AND ME" by Alta Abernathy, Temple's wife. I have read this book to my students for the past 15 years and have yet to find that they were not absolutely enthralled with these two young boys from Oklahoma.